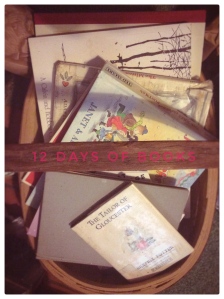 Day 5 moves from Sweden to Ukraine.  Jan Brett adapted a traditional tale about a boy named Nicki who wanted mittens made from wool as white as snow.

His grandmother, Baba, warns him that they will get lost in the snow.  But she knits them for him and sure enough, he loses one in the snow when he goes out to play. 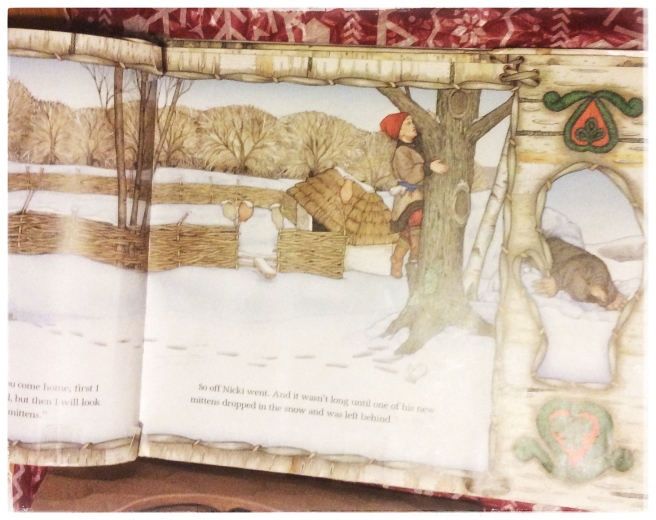 But the mitten looks so cozy and warm that a whole bunch of animals (including a mole, an owl, a badger, and a bear) that pass by decide to crawl inside.  The Mitten stretches and stretches, but the last animal (a little mouse) is one too many.   The bear sneezes and the Mitten shoots up into the sky.

The story is fairly simple, but the best thing about this book is the illustrations.  All the pictures are surrounded by birchbark and embroidery in folk art patterns.  To the left of the main picture we always see a smaller picture of what Nicki is doing (inadvertently scaring the animals towards the Mitten), and to the left we see the next animal coming along.  They are very pretty illustrations, and full of fun little details.

Hopefully this story will inspire you to go play in the snow — or just seek out somewhere warm and cozy to eat something hearty and do some knitting.