While sadly, the kids here in the UK are still in school, they still get to take advantage of the outdoors when they can.  I’m lucky enough to be involved in Girlguiding, so I try to provide that experience when I am able.  Last weekend I took some of the girls on a trip to do some Forest School/minibeast hunting things.  It was a bit damp (typical) but we still had a great time.

One of the highlights was the giant bubbles, made with a loop of rope strung between two sticks, dipped in water mixed with dish soap (washing up liquid).  Here is a rather blurry, rainy picture of one of the girls running after one.  As you can tell, giant bubbles are super exciting!

I don’t have giant bubble wands at home, but I actually think I might have a little tube of bubbles somewhere.  So step one is the sit in the garden and blow bubbles.  Next I am taking inspiration from another poem in Lemonade Sun.

As you can see there’s lots to do!  I do have a jump rope, actually.  I think everyone should if they are able to skip.  It’s great exercise, and actually fun.  But if I get tuckered out from skipping rope, I think I will sit in the garden with a glass of lemon & limeade, “reading books outside at last.” 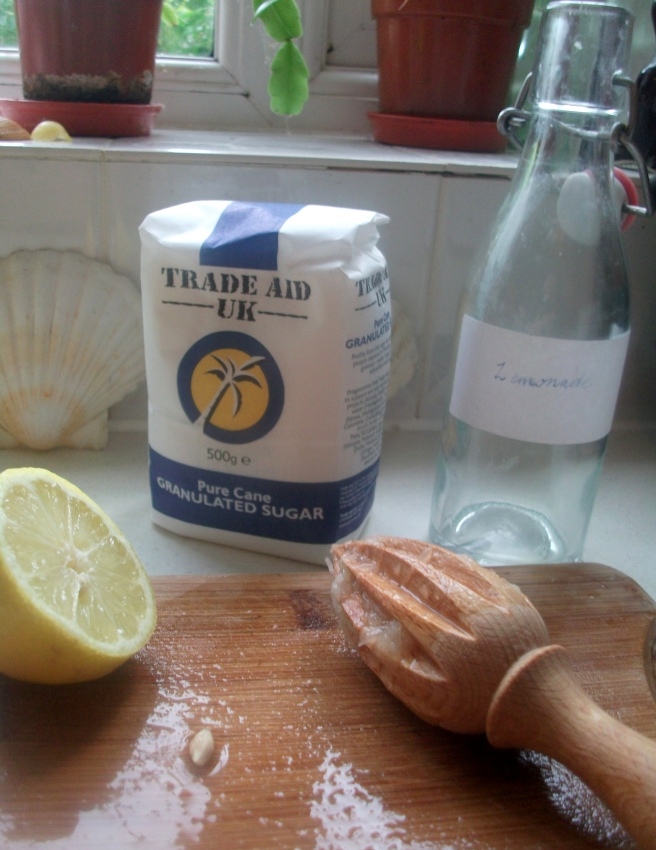 Method
Follow the recipe for Old-Fashioned Lemonade, but substitute two limes for one of the lemons.  That’s all! 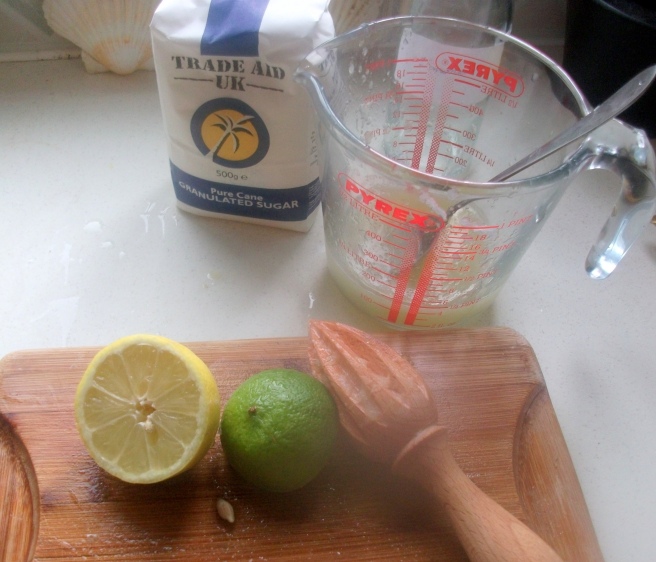 Enjoy outside with a good book!
I would recommend The Days Are Just Packed.  Not only are Calvin and Hobbes suitable for kids of all ages, they are even more suitable, I would argue, for adults, because they will be attuned to some of the more poignant, philosophical and mature material which runs under the surface of many of the comic strips.  It also is a great way to remind oneself of the vivid imagination and endless energy of a childhood Summer.

Activities: blow bubbles, jump rope, read books…maybe climb a tree.  Do I have time for all that with job interviews, paperwork, volunteering, cooking and cleaning?  Probably not.  But I will fit in one or two, and make them really worthwhile.

Summer is here!  The sun is out, the leaves are green, and today seems as good a day as any to begin.

Personally, I never was a huge fan of Summer overall.  Where I grew up in the US, it was hot, sticky, muggy and buggy.  Gross.  But living now in the UK, where we are lucky if we get a couple weeks of heat, I do miss those sticky, humid days.  So when today was a lovely sunny day, I decided to embrace it, and make the Summeriest thing I could think of: lemonade.

And to go with the lemonade, a selection of poetry for children about Summertime.

I had not read Lemonade Sun by Rebecca Kai Dotlich before, but it is a charming collection which really harkens back to a simpler time, when Summer meant running around outside all day.  That is certainly what I did as a kid.

The poems are very simple and suitable for young children, and could be used to introduce poetry and use of rhyme, rhythm and descriptive and action words.  I like the simplicity and brevity of the poem “Lemonade Sun”.  It reminds me of eating popsicles/fudgesicles on a boiling day.  I liked the natural popsicles with pips, and also creamsicles and push pops.  They don’t really have those here, so perhaps that is a recipe for another day.  “A Circle of Sun” is my favorite; it really captures the vibrant, alive feeling one has as a child, the boundless energy.  I used to run down the streets at breakneck speed, never minding a skinned knee or two.  That gets lost as an adult, when you don’t have that long, luscious Summer ahead of you, and you’re always tired and feel creaky even in your 20’s, if you’re me anyway. But Summer days are still long, and anybody should get out in the Sun a little bit!  The Sun is good for you!  I’m sure most of us in Northern climes are probably at least a bit deficient in vitamin D.  So, plan for tomorrow: get out in the Sun and run down the street at breakneck speed (or as fast as you can manage).  Eat a popsicle, messily.  Be “a piece of the sky in a circle of sun”.

The second book of poems is A Child’s Calendar by John Updike, illustrated by one of my favorite illustrators, Trina Schart Hyman. 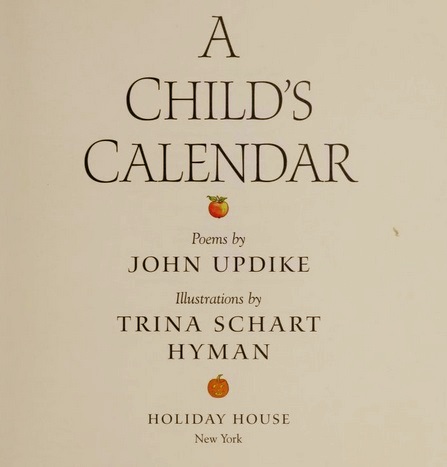 Today I looked at “June”. 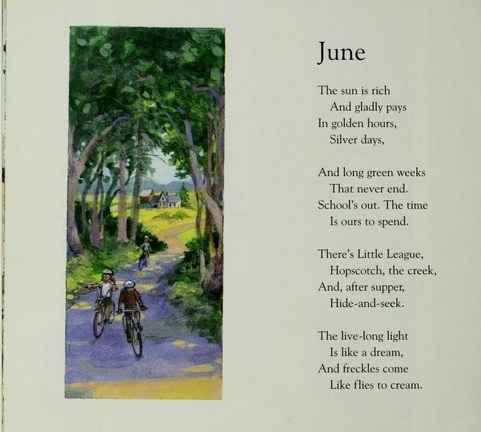 This poem addresses those “long green weeks” which never end, a wonderful feeling to see them stretching before you.  Of course, it is different for the poor kids here in the UK, who have to go to school until well into July.  Sickening, I know.  But this poem captures everything that Summer could be and should be.  Little League, hopscotch, the creek.  I had a creek when I was little, and it was a big deal.  I hunted caddis fly larvae and water skippers and tadpoles.  One of the nicest feelings is the feeling of cool, smooth river pebbles under bare feet. Overall it is a lovely poem, with a fun simile at the end. 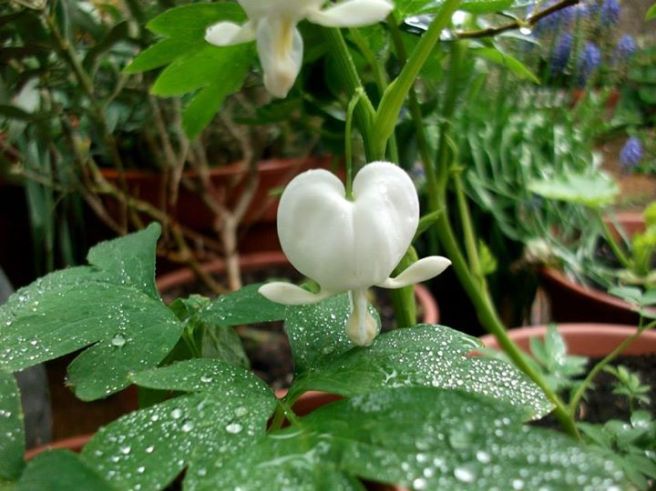 I don’t have a creek now, but I can make the most of a beautiful day by making old-fashioned lemonade.  Here in the UK most beverages called “lemonade” are in fact a citrusy, carbonated beverage that to me, does not qualify.  You can get “cloudy lemonade” in small amounts, but I wanted more than that.  I browsed the internet for recipes, but had to improvise a bit based on the number of lemons I had. 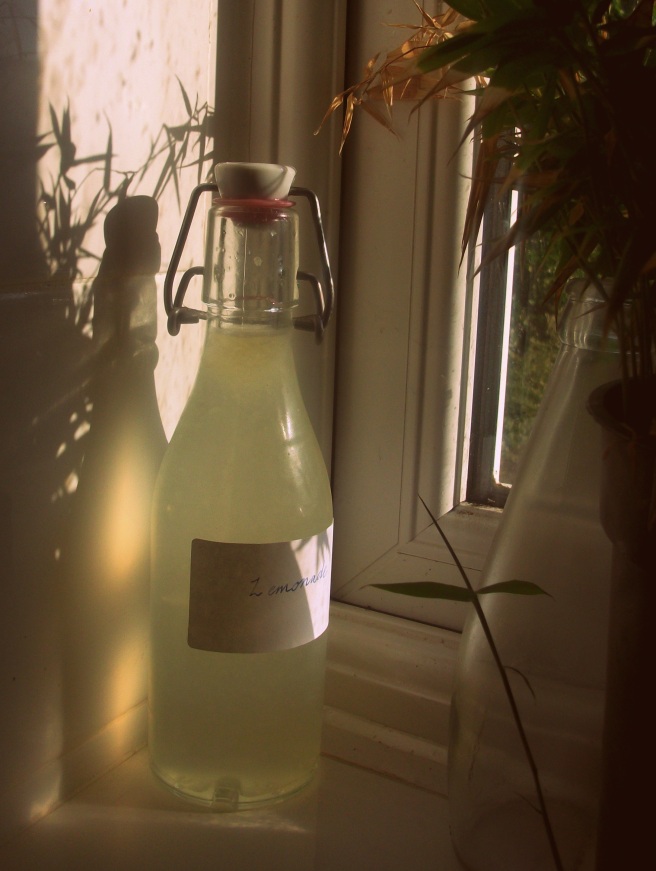 Old-Fashioned Lemonade Ingredients: 5 cups water 1 cup freshly-squeezed lemon juice (I used 2 ½ lemons) 3/4 cup sugar Method: Juice the lemons (I used a wooden hand juicer), and mix in the sugar.  Mix and mix.  Eventually it will dissolve.  Add the water.  The proportion of water/lemon juice/sugar is something that will vary according to taste, so add ingredients until it tastes right to you.  Chill.  This recipe made enough for me to fill a large pickle jar and a small glass bottle. I can’t remember the last time I had home-made lemonade, and oh boy, is it good.  It tastes so amazingly fresh, vibrant and alive.  It’s the nectar of Summer, best enjoyed through a cute straw in a frosty glass bottle.

Enjoy in the Sun!